Garnets For The January Babies 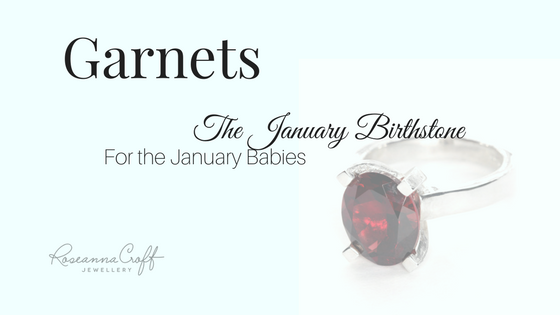 Being half way through January I thought we could talk about January’s birthstone - Garnet.

We find Garnet a luscious and very sexy gemstone. Garnets are found in many colours, the most common colour however, is red. In fact, the only colour garnets aren’t is blue, which is ironic as January is known as the ‘blue’ month, where spirits aren’t so high.

In 1870 Tiffany & Co published a poem on birthstones, starting in January here is the first line…

‘By her who in this month (January) is born, No gem save garnets should be worn; They will ensure her constancy, true friendship, and fidelity.’

The poem hints at the meanings linked to the gemstone. Garnets were often given between friends as a sign of true friendship. They helped fight illness and some say cure depression. I love historical meanings in gemstones, don’t you!?

This stunning gemstone can also be given on the 2nd and 6th wedding anniversary according to the the Jewellery Gift List. Although not traditional wedding gifts, the list has been endorsed by the Jewelers of America, the American Gem Society, the American Gem Trade Association, and the Gemological Institute of America (GIA).

By her who in this month (January) is born, No gem save garnets should be worn; They will ensure her constancy, true friendship, and fidelity.

We have some stunning Garnets in our Vibrance range. Our garnets are a lustful, deep red thats stands  out beautifully against the bright Sterling Silver. Because their hardness is 7.0 – 7.5 on the Mohs scale it makes them a great gemstone for everyday use (but that doesn’t make them invincible!)

Are you a January Baby!? If so, we’d love to hear what you think of your beautiful birthstone so leave us a comment!

You can also sign up to receive The Luxury Edition in your inbox every week where we’d love to share our latest blogs, new collections, special offers and so much more exciting information!