The Jewellery Worn to the Royal Wedding by Roseanna Croft Jewellery

What a MAGICAL weekend! On the 19th May 2018 we saw Prince Harry, marry Meghan Markle. They are now known as Duke and Duchess of Sussex and Meghan’s official title is Her Royal Highness, The Duchess of Sussex. The dress was stunning, the venue was amazing (obviously, it’s Windsor!) and the newly weds were so in love, but if we’re honest we only had eyes for the spectacular jewellery worn to the Royal Wedding!

It would be rude if I didn’t start with our new Princess so, for starters lets talk about that tiara! The Duchess’ veil was held in place by the Queen Mary’s Diamond Bandeau which was lent by Queen Elizabeth. The diamond bandeau was made in 1932, with the brooch (which is removeable) dating from 1893.

The wedding rings were created by Cleave and Company, as was Meghan’s engagement ring. Markle’s ring was fashioned from a piece of Welsh Gold, gifted by Queen Elizabeth, which is a tradition in the Royal Family. Both rings were apparently crafted in the Cleave workshop, yes, we said both! Prince Harry – one of the first men in the Royal Family to wear a ring – now wears a platinum band with a unique textured finish. (We were quite wrong about what we thought she would have! The Princess had a ring made which is much more simple and traditional.)

I think we all agree when I say that all the jewellery worn to the royal wedding this weekend was showstopping, but not quite as so as Meghan’s smile and the look of true love in the newly married couple’s eyes. 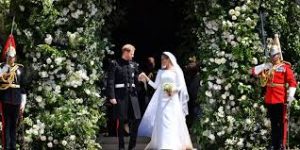